By Khayakazi Mbunyuza on 20th July 2016 in News 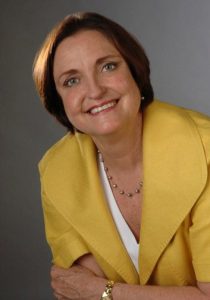 Marguerite Callaway is Chief Executive Officer of the Callaway Leadership Institute, an international leadership development company whose mission is to help current and aspiring leaders reach their full potential. She is also a founding member of the GTI.

Ms. Callaway’s life’s work has been to understand the conditions that foster leadership effectiveness and organizational success. In the conversation below, she speaks with GTI Executive Director John Gilmour about how teachers and leaders must adapt to 21st century needs.

JOHN GILMOUR: When it comes to teaching, I believe scholarship and knowledge are vital and important. But in the 21st century, what I think is more important is that teachers acknowledge and share the vulnerability and awareness of what they don’t know, and don’t feel threatened by this lack of knowledge. Instead teachers must embrace that learning is a shared emotional journey, not a journey where one person “feeds” the other information.

MARGUERITE CALLAWAY: This is the paradigm shift. Teachers need to feel secure enough, as you said, to say “I don’t know”. Then, they’re also modeling that behavior for the student to go deeper into their own inquiring: “If it’s safe for the teacher to not know, then maybe I don’t have to memorize everything either.”

What we know about job performance and skill development, particularly in complex tasks, is that you never do it perfectly in one leap. But yet our expectations have been that is has to be perfect in the beginning. So much of skill development is knowing that you tried it, it didn’t work, and then reflecting on what part of it didn’t work….that triggers the development of stronger emotional intelligence, that resiliency.

And I want to broaden these ideas beyond teachers to the spectrum of other people who we expect to be experts: engineers, doctors, scientists. One transformation that is happening at medical school is that before, you memorized and studied and learned a body of knowledge, but now the bigger question is “How do I access new information?” There is a proliferation of scientific information that is revolutionizing what we know in a variety of specialties. So many physician’s understanding is being outmoded every decade. And so, they’re having to learn in medical school “How can I open up to the fact that my field is a continual learning process?”

People are also no longer willing to be passive recipients of a physician’s expert’s knowledge. Previous generations would go to a practitioner say “Give me what I need to feel better. Fix my body part. Do the surgery.” But what we’re learning now is that you can’t change health unless the patient is also equally committed and engaged in the process. So, education and health may be two different fields, but what the future is requiring is very similar. 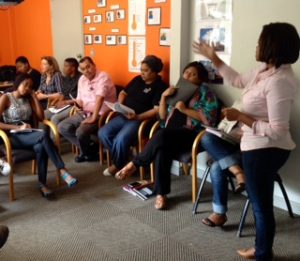 JOHN GILMOUR: The relevance of all this now comes from the slow recognition of the failure of the other approaches to solve the problems of this country.

MARGUERITE CALLAWAY: Yes. Whether we realize it or not, we are evolving as a species and the structures of the 19th century and 20th century–which were industrialization and economic growth–has run its course, and we’re now dealing with the unintended consequences of that approach.

The positive side is that we have more information and free-flowing information with internet/social media. And we have an enhancement of knowledge that is now freely available or at a very low cost. So as the vehicles of gaining information is growing, people of your generation are not buying into the old model and they’re saying “I don’t see satisfaction in that. I want something more in my life.”

There is something new that is truly in the process of emerging that you see in South Africa, in the United States, all over the world. And there’s always a chaotic period right before something new is being born because the old structures don’t work anymore. People have lost faith in them.

JOHN GILMOUR: Isn’t the main reason for the rejection of the old structures this exaggerated inequity? Instead of this new world of industrialization and information sharing bringing people across the divide into closer range, it’s just not happening. Now instead you sit with a planet of 6 billion people, the wealth of a just few hundred people and the extreme poverty of so many.

MARGUERITE CALLAWAY:  I think that’s a factor, but I don’t think it’s just the inequity. I think it’s the deepening of people who want to say “I want something more of my life.” Because if it was just inequity, then at least the 1% would actually be happy, but they’re not. This is where I think what’s happening with people is that they’re saying “I don’t want the old rules, I want my voice heard. And I want to find what is meaningful in my own life.” Whereas before, just surviving was considered progress.

To hear more from Marguerite Callaway, visit her blog: Leadership Every Day