By Khayakazi Mbunyuza on 22nd March 2021 in News 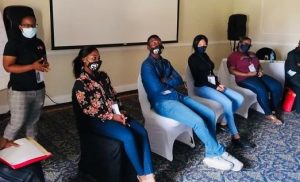 This year, we celebrated Human Rights Day with heavy hearts over the passing/killing of Mthokozisi Ntumba under circumstances that eerily mirror those of 21 March 1960, where 69 people died and 180 injured during the Sharpeville shootings where police officers opened fire on peaceful protesters who had gathered against Pass Laws. While this was under an entirely different regime, 61 years later, a former University of Witwatersrand student was gunned down by police officers during a peaceful protest over tuition fees. We mourn his passing and send condolences to his family and loved ones.

While this may be a sombre way to have started Human Rights Day, we are encouraged by the many strides taken by the Global Teachers Institute and its funders and partners to recognise the need for reflective, empathetic and socially responsible master teachers who can impact the lives of their learners and ultimately the future of South Africa. This year, in celebrating Human Rights Day, we have been able to share in a reflective circle in Mbombela, Mpumalanga with representatives from the Department of Basic Education, the Mpumalanga Province Department of Education, the Member of Executive Council’s Office for Education and our young teachers in training, the future leaders placed in the Bohlabela School District in MP.

The day was one of great inspiration, with future leaders being reminded of the privilege of serving young minds from various backgrounds who will impact communities and ultimately impact the nation at large. We were honoured to have from the DBE Gerrit Coetzee and Ben Lubisi from the Initial Teacher Education Directorate; from MPDoE was Dr Nokuthula Mthethwa, Lomasonto Nkentshane, Kgadi Teffo, Zanele Khumalo and Musa Ngobeni, and our keynote address was delivered by Dr Cyrian Sipho Mkhabela a representative of the MEC for Education. Once the future leaders and guests had been addressed, the day’s highlight began – this, of course, being the Reflective Circle, a core session to the Professional Development Days of the Future Leaders Programme.

The Circle was a transgenerational and trans professional mix of people who openly shared their views around the importance of education being a fundamental human right for both children and adults. The conversation highlighted the inequality in how education is provided in South Africa and the developments of inclusive education in schools around the country. This conversation sparked hope in the hearts of all who were present as it raised awareness of the realities within the education sector and, more importantly, the wins within the sector.

Over the past 69 years since the Sharpeville shootings, South Africa has seen an era dissolve, and many of its inequalities remain. However, it is encouraging to know that education as a fundamental human right sees a new dawn of inclusivity and that conversations are being held at all levels within the education sector. It gives us great joy to facilitate such discussions at the Global Teachers Institute and raise awareness around inequality.